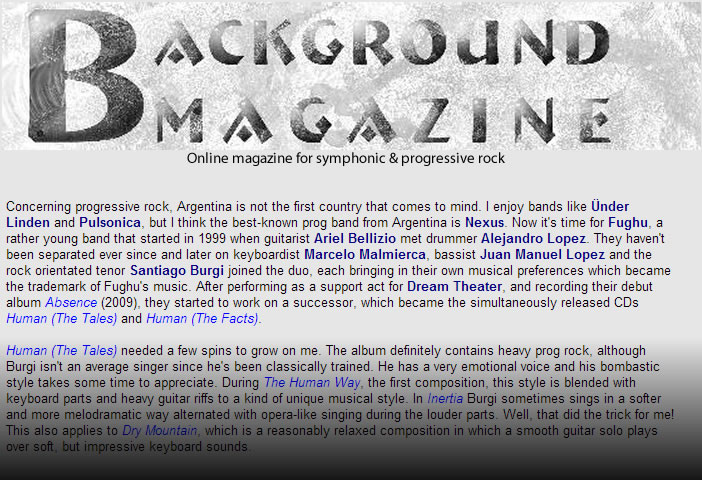 Concerning progressive rock, Argentina is not the first country that comes to mind. I enjoy bands like Ünder Linden and Pulsonica, but I think the best-known prog band from Argentina is Nexus. Now it’s time for Fughu, a rather young band that started in 1999 when guitarist Ariel Bellizio met drummer Alejandro Lopez. They haven’t been separated ever since and later on keyboardist Marcelo Malmierca, bassist Juan Manuel Lopez and the rock orientated tenor Santiago Burgi joined the duo, each bringing in their own musical preferences which became the trademark of Fughu’s music. After performing as a support act for Dream Theater, and recording their debut album Absence (2009), they started to work on a successor, which became the simultaneously released CDsHuman (The Tales) and Human (The Facts).

Human (The Tales) needed a few spins to grow on me. The album definitely contains heavy prog rock, although Burgi isn’t an average singer since he’s been classically trained. He has a very emotional voice and his bombastic style takes some time to appreciate. During The Human Way, the first composition, this style is blended with keyboard parts and heavy guitar riffs to a kind of unique musical style. In Inertia Burgi sometimes sings in a softer and more melodramatic way alternated with opera-like singing during the louder parts. Well, that did the trick for me! This also applies to Dry Mountain, which is a reasonably relaxed composition in which a smooth guitar solo plays over soft, but impressive keyboard sounds.

Twisted Mind, Goodbye and Evil Eyes have about the same song structure with the classical trained voice blended with modern electronics and keyboards and with fierce guitar and bass riffs. These three progressive songs are well-presented and interesting with many individual solo spots. As far as the intensity of the music is concerned Fughu might be compared to a band like Pain Of Salvation. Mayem is the final composition on the first CD. This song is even intenser featuring a didgeridoo that provides it something extra. Guest guitarist Jeff Kollman (Cosmosquad,Chad Smith’s Bombastic Meatbats) lent his distinctive sound to the second guitar solo. Together with Inertia I found these two compositions the most impressive of Human (The Tales).

The second CD Human (The Facts) continues with Void. The intensity of the vocals reminded me of Daniel Gildenlöw. The voice is challenged by the same fierce guitar parts we’ve heard on Human (The Tales). It seems as if the keyboards get some more attention on this CD, as you’ll hear in Quirk Of Fate. Here the majestic vocals ofDamian Wilson are supported by the voice of Santiago Burgi. Wilson’s voice perfectly suits the music and I wish they had asked him for some more vocal performances. The fluent guitar solo and the less bombastic atmosphere make this my favourite composition of both CDs. Another strong composition is The Play, which reminded me ofShadow Gallery. The multi-layered vocals and the piano sound perfectly together.

This second CD is slightly more varied. Climb has strong emotional vocals by guest vocalist Dario Schmuck, which provides the song a nice sound. A rather strange composition is Vater dominated by German vocals and with classical influences. The average metal fan will probably hear influences of Rammstein because of the German vocals, but I guess that’s the only resemblance, for the music is totally different. Winter is an instrumental tune that starts with a piano and gently turns into heavy sounds eventually resulting in a fierce instrumental. The album ends with The Facts, a nice progressive song that again combines the strong voices of Burgi and Schmuck with the heavy progressive guitars and keyboards. This song’s a killer, shouting out for more!

When you listen for the first time to Fughu you must get used to the voice of Santiago Burgi, but once you’re grabbed by his intense way of singing, the compositions will do the rest. For me the second album contains the more interesting parts; it seems as if the balance between the instrumentalists is better than on the first CD. Although I enjoyed Fughu’s albums very much, I have to be in the right mood to listen to those intense vocals. I think Argentina has got a new musical ambassador and I hope these albums will be picked up by other countries.