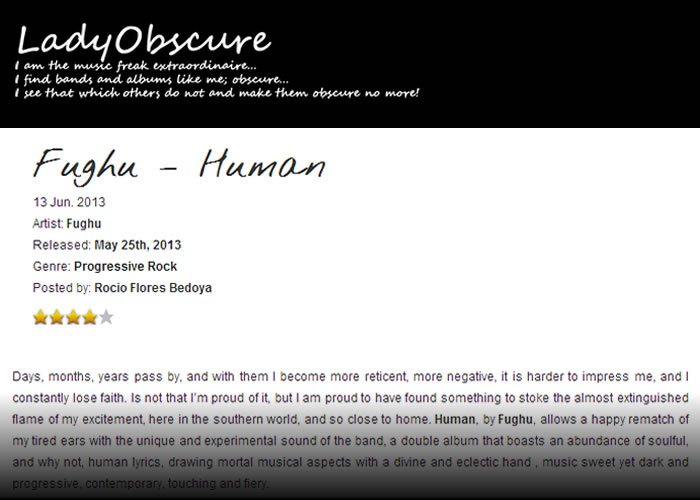 Days, months, years pass by, and with them I become more reticent, more negative, it is harder to impress me, and I constantly lose faith. Is not that I’m proud of it, but I am proud to have found something to stoke the almost extinguished flame of my excitement, here in the southern world, and so close to home. Human, by Fughu, allows a happy rematch of my tired ears with the unique and experimental sound of the band, a double album that boasts an abundance of soulful, and why not, human lyrics, drawing mortal musical aspects with a divine and eclectic hand , music sweet yet dark and progressive, contemporary, touching and fiery.

Fugu, without H, is a blowfish able to kill 80 people with a single drop of its venom. Fughu, with a bloody H on it, is a neo progressive rock band native from Buenos Aires, Argentina. Fughu was born around 1999, but its conception could well be traced back to the teenage and childhood years of its members, to days like when in Buenos Aires two strangers, guitarist Ariel Bellizio and drummer Alejandro Lopez were kicked out of school for improvising on stage and playing Megadeth and Deep Purple songs for the crowd, when keyboardist Marcelo Malmierca, was totally blown away by King Crimson with only 10 years old, when bassist Juan Manuel Lopez first heard Queen’s Sheer Heart Attack, when years before that Santiago Burgi, now tenor and vocalist of the band, was born with the Number of The Beast sounding as background song. A perfect algorithm of happy coincidences in the lives of young men whose souls were kidnapped by music from their birth, and years later were united under the name of Fughu.

The professional sound and theatrical dramatism of their music caught the attention from the first moment, it is not surprising that Mike Portnoy had selected them to open a Dream Theater show at Luna Park years ago, or that Absence, their first album had received countless compliments from the local and international press. I said, and I repeat, that Human is a rematch with the band for me. The first album would have come to me for such a twist of fate, as an unexpected and unfinished love, of those which collide with you when you walk down the street, and you immediately feel united to. Years later the happy ending of this story comes when you meet it again and reunite forever. It was something like that what happened to me with Human, because the journey with this double album revived the passion that inspired me the first, this time with new strength and a load of new emotions. Human also features special appearances of Damian Wilson (Threshold, Headspace, Landmarq, Ayreon), Jeff Kollman (Cosmosquad, Glenn Hughes, Chad Smith’s Bombastic, etc.), the Argentinian tenor Dario Schmunck, and the independent autochthon musician Gea, guests that increase even more the musical value and add their talent to the progressive elements of the compositions, required by any lover of this genre to properly delire of pleasure.

But let’s go to what brings us all together, music. Both albums, Human -The Tales, and Human -The Facts are complex and elaborated albums, based on profound and far reaching concepts, almost like a rebel and nonconformist response to mp3 disposable music that in these days rains over us, and I have to say, both albums are so solid that when you listen them from beginning to end the similarity with an audiobook, rare and innovative, is more than imminent.

Human – The Tales is, to its fullest extent, the worthy continuation to what has been already shown in Abscence. A faithful, glorious progressive sound doesn’t seem to be enough since between lines we can also read the many and varied influences of the instrumentalists, ranging from the always obvious Dream Theater, to Cosmosquad, Tribal Tech, Rush, Black Sabbath, Tool and Pink Floyd. Progressive rock with a continuous metal edge, surrounded by an aura of classical music and a “latino” scent, evanescent but noticeable. The album is so solid that I would not comment on any particular song, 70’s prog rock influences are immediately visible, but the music is impregnated with a very modern and contemporary sound, with that smell of newness that can hook you in two seconds but it takes hours to fully understand. The virtuosity of each musician is undeniable, but the music is not structured according to it, but rather dominated by melodies and arrangements that emerge immediately from the artist’s soul; dark riffs, guitar and keyboard solos are still hot because they’ve been ripped out straight from the musicians’ hearts.

Human – The Facts is a conceptual work, newer and much more risky, a little more symphonic too, especially because of the enveloping and atmospheric keyboards, and because that in addition to Santiago’s vocals, which naturally are emotive, there are also Damian Wilson and Dario Schmunck showing their talent. The work is detailed, complex, almost surreal, with a story that begins like all stories: with a woman. Framed by cryptic letters, condensed characters with their own personalities, all surrounded by the same progressive symphonic rock, theatrical ala Andrew Lloyd Weber, with neoclassical touches, always off bounds close to operatic singing style, sometimes desperate, sometimes sweet, but always emotional forming harmonies and a rare and disturbing hybrid of ecclesiastical chants and battle cries. Stands out Void, which begins with an a capella whisper and goes in crescendo to end in chaos and guitar power. The Play, a beautiful piano ballad sprinkled with breathtaking vocal harmonies, Vater, peeking out even more Dario Schmunck’s vocal intensity in an explosion of dramatic power, and of course, the ever majestic interpretation of Mr. Wilson on Quirk Of Fate.

The music of Fughu is created deep within the heart, but you and I know that this is not enough if the production is not at the same level of quality. Thank God production and mastering work is impeccable. The albums were produced by Fughu itself, and mastered at Fascination Street Studios in Sweden, where albums of well known bands such as Symphony X, Katatonia, Kreator, Devin Townsend Project were mastered too. I personally still cannot understand how it is possible that Fughu have not signed with any record label yet, I mean, is obvious the band has what it takes and is more than ready to rub shoulders with the big ones.

Finally, I don’t know if it’s the fact that it is a double album, or simply because of the marvelous creativity behind its music and lyrics, but Human is one of those albums that you may listen several times and will never cease to amaze. For me, Human contains the magic of those creations that spring from the soul of the authors, and like all magic, one can choose to believe in it or not, depending on this decision the effect it has over you. I decided to believe and it has haunted me, to the point of being able to transport me to its parallel universe, built unconsciously piece by piece by its melodies, its progressive power, its emotion, silences and eclecticism. And God knows I am not an authority, I’m merely a girl with a big heart for music and a sharpened pencil, but of one thing I’m sure, it is not easy to make progressive metal, and even harder in South America. As I said earlier, over the years is more difficult to surprise me, and Fughu surprised me to the point of persuading me that their style is superior and transcendent, and their music is a one way ticket.