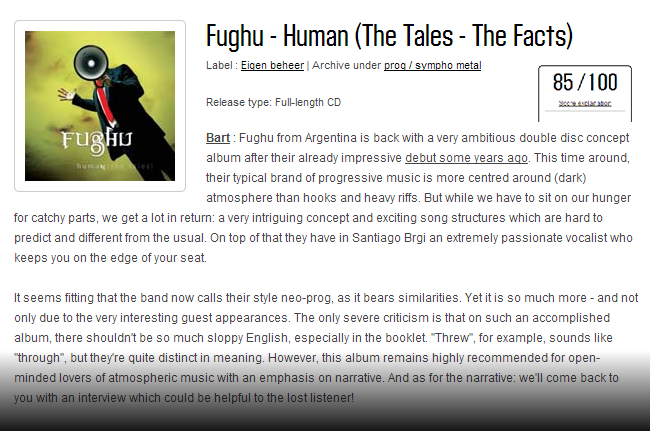 Fughu from Argentina is back with a very ambitious double disc concept album after their already impressive debut some years ago.

This time around, their typical brand of progressive music is more centred around (dark) atmosphere than hooks and heavy riffs. But while we have to sit on our hunger for catchy parts, we get a lot in return: a very intriguing concept and exciting song structures which are hard to predict and different from the usual.

On top of that they have in Santiago Burgi an extremely passionate vocalist who keeps you on the edge of your seat. It seems fitting that the band now calls their style neo-prog, as it bears similarities. Yet it is so much more – and not only due to the very interesting guest appearances.

The only severe criticism is that on such an accomplished album, there shouldn’t be so much sloppy English, especially in the booklet. “Threw”, for example, sounds like “through”, but they’re quite distinct in meaning.

However, this album remains highly recommended for open-minded lovers of atmospheric music with an emphasis on narrative. And as for the narrative: we’ll come back to you with an interview which could be helpful to the lost listener!