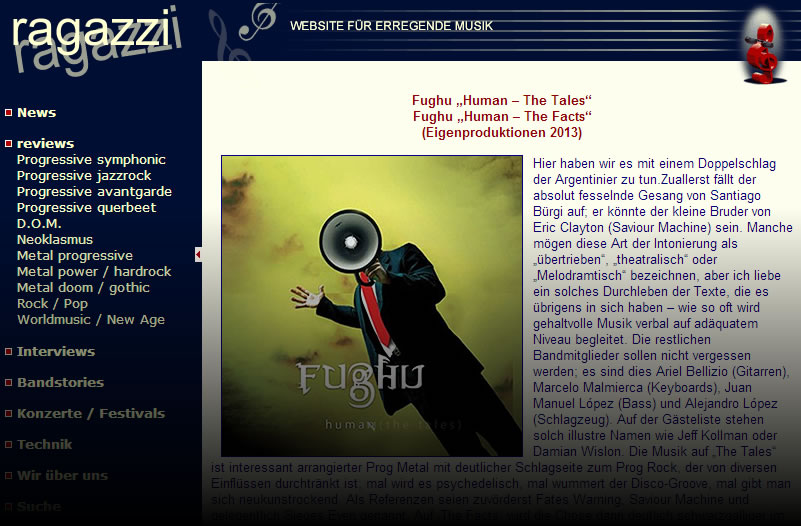 Here we have it covered with a double blow to the Argentine tun.Zuallerst the absolutely captivating vocals of Santiago Bürgi , and then it could be the little brother of Eric Clayton ( Saviour Machine ) .

Some like this kind of voicing ” exaggerated “, the ” theatrical ” or ” Melodramtisch “, but I love such a reliving of the texts that have it the way in – as is so often full-bodied music accompanies verbally to an adequate level.

The rest of the band should not be forgotten, they are the Ariel Bellizio ( guitars) , Marcelo Malmierca (keyboards) , Juan Manuel López ( bass) and Alejandro López (drums). On the guest list are such illustrious names as Jeff Kollman or Damian Wislon .

The music on ” The Tales ” is interesting -arranged prog metal with a clear list of prog rock that is saturated by various influences, sometimes it is psychedelic , sometimes wummert the disco groove, sometimes a Priority to neukunstrockend .

As references first place, Fates Warning , Saviour Machine , and occasionally Sieges Even be mentioned . On “The Facts” which Chose becomes clear black bilious in the sense of an egg dance between sadness and anger .

Change airy ambience parts with coarse – metallic eruptions, which makes the band quite unique because they zelebrieret this iridescence , although literally , but it looks lovely here unpretentious and fits thematically very well inden context.

Even Quietschekeyboards , not to be confused with cheesy sounds are heard. The vocal performance has a huge variance width , ranging from chant about whispering to bel canto . Imagine Daniel Gildenlöw sang at Devil Doll and this occasionally even in German – ” Is that the German class Siemer ? ”

For me Fughu are the metallsich iridescent quintessence of bands like ELP , Van der Graf Generator , Symphony X and Queen . This work should be heard several times in different prevailing moods ; every time it unfolds ( at least for me ) a different effect , but always calling for a further passage .

I can not say that about every album by far. Caramba!