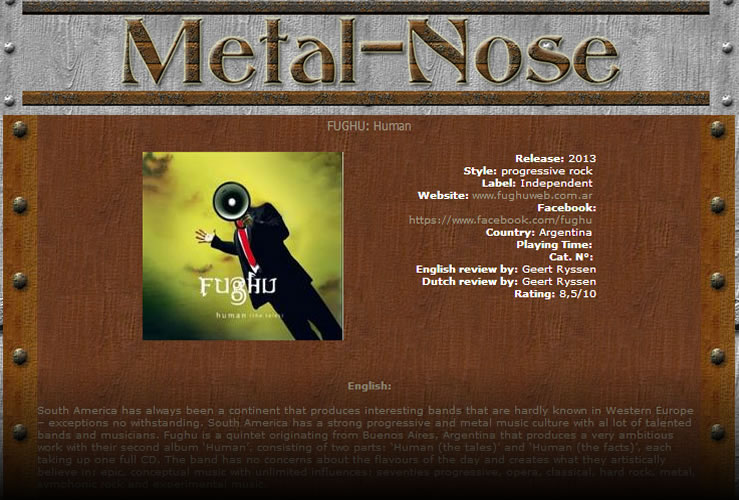 The band has no concerns about the flavours of the day and creates what they artistically believe in: epic, conceptual music with unlimited influences: seventies progressive, opera, classical, hard rock, metal, symphonic rock and experimental music.

‘Human (the tales)’ opens with ‘The Human Way’ which has some modern metal influences that get a different twist through the operatic tenor of singer Santiago Burgi and the complex instrumental arrangements that bring the listener into various moods and swings. ‘Inertia’ starts with a heavy guitar riff but switches to a more lyrical melody and a semi-acoustic arrangement. But this is only the beginning.

The song goes back to a climax that has an operatic feel to it with a symphonic sounding band. Mood swings are the trademark again but the music never loses its structure. Lots of modern progressive bands have a massive monolithic sound with overkill arrangements. This is not the case with Fughu: they bring you up and down, create light and shade and produce a lot of dynamics in their music.

‘Dry Fountain’ starts like a traditional ballad and so it develops. Burgi Santiago sings with a very sensitive voice and lifts the song to a higher level. Guitarist Ariel Bellizio plays a beautiful and sensitive solo.

‘Twisted Mind’ starts with a rhythmic loop and makes me think of Saga but the voice of Santiago gives it that little bit of extra depth. The band really knows how to create tension in their compositions and this piece is a perfect example of that. Keyboard player Marcelo Malmierca doesn’t solo too much but lays down a carpet of sound that serves and colours the moods.

The dramatic intro of ‘Goodbye’ soon makes way for a very atmospheric piece of music with Santiago giving an exceptional vocal performance. Exciting, epic and beautiful!

‘Evil Eyes’ continues the somewhat darker mood before exploding into a heavy progressive song. The rhythm section consisting of bass player J.M. Lopez and drummer Alejandro Lopez never play the kind of rhythm patterns that are almost standard these days in prog metal, but their approach is that of fusion players, going along with the pace of the songs or providing the pulse for the other musicians.

The last track of CD 1 starts with very mysterious sounds and has a somewhat desolate feel to it. Again the whole band shines and adds even a little extra with guest player Jeff Kollman playing the second guitar solo.

The second CD ‘Human (the facts) is a different piece of cake with eight pieces that are a bit more accessible but nevertheless as interesting as the first CD. Two guest singers make their appearance here: Damian Wilson (Threshold) on ‘Quirk Of Fate’ and Dario Schmunck on ‘Climb’, ‘Vater’ and ‘The Facts’ who bring in a nice contrast with Santiago’s voice. Again the approach is epic and very sophisticated, but also very listenable and with more room for instrumentalists. A nice piece of progrock in the best sense one can think of!

Fughu is a revelation and makes music for those who like a well cooked and balanced haute cuisine meal without pretention but with a lot of taste and quality ingredients. Musical ‘fast food’ lovers should go elsewhere.