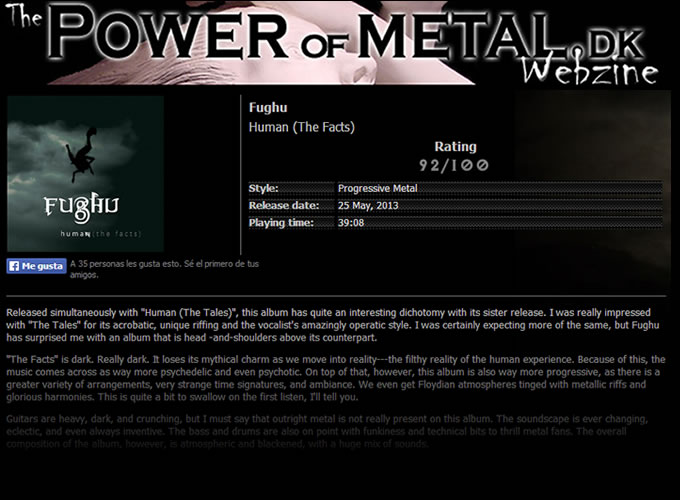 Released simultaneously with “Human (The Tales)”, this album has quite an interesting dichotomy with its sister release. I was really impressed with “The Tales” for its acrobatic, unique riffing and the vocalist’s amazingly operatic style. I was certainly expecting more of the same, but Fughu has surprised me with an album that is head -and-shoulders above its counterpart.

“The Facts” is dark. Really dark. It loses its mythical charm as we move into reality—the filthy reality of the human experience. Because of this, the music comes across as way more psychedelic and even psychotic. On top of that, however, this album is also way more progressive, as there is a greater variety of arrangements, very strange time signatures, and ambiance. We even get Floydian atmospheres tinged with metallic riffs and glorious harmonies. This is quite a bit to swallow on the first listen, I’ll tell you.

Guitars are heavy, dark, and crunching, but I must say that outright metal is not really present on this album. The soundscape is ever changing, eclectic, and even always inventive. The bass and drums are also on point with funkiness and technical bits to thrill metal fans. The overall composition of the album, however, is atmospheric and blackened, with a huge mix of sounds.

Santiago Burgi, the vocalist, blows away his performance in “The Tales”. This guy is just incredible with his sound that is like a cross between Damian Wilson and Devon Graves. Thus, he has a rich, powerful sound, but a timidly creepy one, too. This style perfectly fits the music and the themes, and he outdoes himself again and again with his opera-tinged performance and his introverted dialogue. Believe me, I can’t believe that I enjoy it so much, but he simply wows me every time.

So, this awkward and slightly scary music really finds a place in my mind. From the surreal “Void” to the very Headspace-like “Quirk of Fate” to the beautiful “Climb”, every track is very well done. However, the final track, “The Facts”, is the best track here, and one of the best songs I’ve heard this year. Incredibly shy lyrics meet crashing guitars and perfectly-placed blast beats to ascend to a glorious chorus of harmonies and simply interesting and haunting vocals. I’m stuck on this song, as it is worth the album price by itself.

Fughu has outdone their other release by an impressive amount. It’s almost as if they matured in a short amount of time, as “The Facts” is perfectly balanced, unique, and fits together beautifully. This little band from Argentina has officially made my watch list.